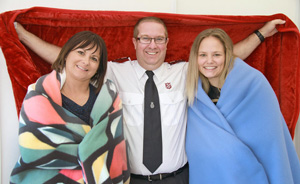 The Salvation Army Kalgoorlie-Boulder Corps is starting its annual winter appeal, with more than 30 blankets and dozens of tins of food already donated by Kalgoorlie Metro.

The team at Kal Metro launched its own collection drive for the Salvos back in April, handing over more than 30 blankets and four big boxes of food this week.

Salvation Army Captain Mark Schatz said the donation would go a long way to supporting those in need this winter.

“This is true-blue Aussie spirit and generosity in its best,” he said.

“It really fills my heart with joy to see people doing their part to help relieve the stress of winter on those in need in the community.”

Capt. Schatz said he hoped other businesses would follow in Kal Metro’s footsteps to help this year’s winter appeal.

“It’s not really that hard — if we were to get 10 businesses on board to do it and raise a few items each, it would turn into quite a fair bit of stuff, which would go straight back on to the streets for those who need it most,” he said. “Every single blanket and every can of food really does help.”

Kal Metro head of sales Renee McLean thanked the community for digging deep and helping to make the appeal a success.

She said the business would definitely look at holding the appeal again next year.

Donations to the Salvos’ winter appeal can be made at the Boulder or Kalgoorlie Salvos’ op shops, or at the main centre on Oberthur Street.

Our own Elliot Briers was recently featured in The Property Tribune, offering his knowledgeable insights about the changing land market in Kalgoorlie. The article discuss how the property market has changed in regional towns since COVID arrived. Highlighting how the possibility to work from home has become an option for many, who are now seeking… read more » 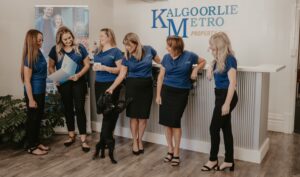 The story of Guinness & my battle with cancer

Our Kalgoorlie Metro Property Group Team is the number 1 selling agent in Kalgoorlie for 2018, 2019, and 2020 so far. We are friendly, progressive, professional, hardworking, and highly skilled. But what stands out is the way we work as a team, not just as individual sales agents.